How to Subvert a Survey

When we set out to survey people about turning Just Evil Enough into a cohort-based live course series, we knew we had to be clever about it. Not just because we wanted to make sure we got the best results, but because you shouldn’t buy a book about suverting existing systems if the authors don’t do just that every chance they get.

We’re going to share some of the tactics we employed, even if it makes us feel a little dirty. Please don’t hate us.

Whenever you’re planning a survey, you need to know who your audience is, what constraints you have, and what actions you’re hoping people will take.

Tactic: A reward that self-selects the audience

To encourage people to respond, we wanted to offer a reward. That’s tricky, because simply offering a cash prize would have given us many responses from people who weren’t our target audience. So we decided to offer a free keynote talk or workshop for their organization—something we usually charge a lot for. This helped respondents self-select, because our target audience would find the offer valuable.

Of course, this creates another problem. We’re choosing the winner from among the hundreds of people who responded, but the more respondents we have, the lower a person’s chance of winning. So why would they share it?

Everyone wants to be on the winning team. So we created two nearly-identical surveys (more on that below) and labelled them Team Orange and Team Black. And we said we’d pick a winner from the survey with the most responses, which encouraged respondents to share the survey with their networks urging them to join the same team. We made it easy for them to do this with a click: 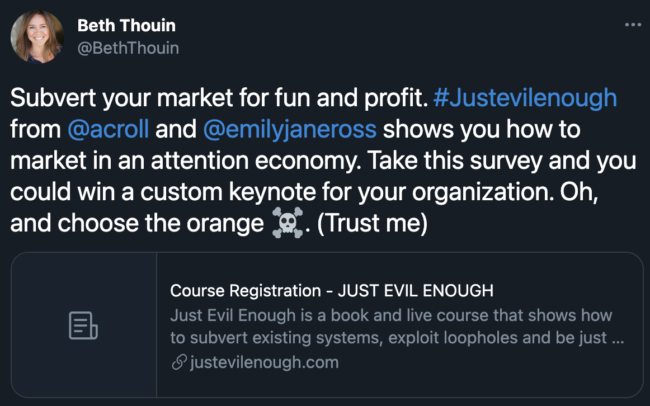 In Chuck Pahlaniuk’s Choke, the protagonist runs a scam to pay for his mother’s care: He goes to fancy restaurants, pretends to choke on food until someone “saves” him. The wealthy Samaritan then feels obligated to help him, and sends him money to help with his life.

This is a common tactic of travelling salespeople: Ask for a glass of water, and your mark is more likely to help you in additional ways. So by asking people to help us with the survey, and then to help us by sharing it, we’re encouraging them to help us further by taking the course or buying the book.

You may wonder why we’re explaining this here, since it ruins the trick. But we’re not actually trying to be evil—and we figure that when you see these tactics explained, you’ll realize we have a lot to teach.

Why black and orange? We’re glad you asked. They’re our color scheme for the site and brand, but there’s a method to that madness. We spoke with an expert on neuroscience and color theory (one of the many case studies we’ve been recording for the book) and it turns out orange is seen as active and provokes responses. 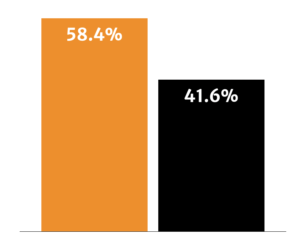 Most people don’t know what to pay for a course. A technique called price anchoring allows you to plant a price range in your market’s mind, urging them to select from the middle of a range. In one study of taxicab payment screens, suggesting a range of tips from 15% to 25% increased tipping amounts by 38%.

We have a pretty good idea of what we want to charge already, based on course size and duration. But we never want to miss a chance to put some of these tactics into action, so we offered four pricing options:

The average price our respondents suggested was $1,792.

The responses varied significantly (though an astute analyst would need to test whether color choice influenced the response.) Asking what we should charge resulted in a $300 greater amount than asking what the respondents would pay:

There are plenty of other details in the survey:

Hopefully you can put some of these tactics to work in your own surveys. We make no apologies for being subversive. But we promise to do it in the open. After all, we’re not actually evil—just evil enough.