The Psychology of Škoda – A Masterclass in Reframing.

The goal: Reposition an historic Eastern European car brand, one of the oldest in history, from being ‘harder to sell than nuclear waste’ to one of Britain’s favourite cars.

The vulnerability: Škoda repositioned a weakness (being undesirable) into a feature (being undervalued), they did this by changing the positioning and framing of the product and leveraging motivated reasoning within the market.

What changed: When Škoda invested 13 billion dollars in product and performance, and communicated comparative advantages around price and value – nothing changed. To succeed, they attacked the stigma of the brand in the market and flipped people’s mindsets on their heads. They looked for consumers who were motivated by values other than prestige to win out.

The exploit: The brand moved from objective to subjective thinking. They focussed on intangible benefits to carve out a new niche that was as successful as it was authentic. They used motivated reasoning and framing to reposition the brand in the market.

The result: In 1991, Škoda was making 200,000 cars a year and had two models. Today they manufacture 2 million cars a year in 100 countries, with an extensive range of very good cars. After the ‘It’s Škoda, honest’ campaign, the brand saw 1540% growth in the UK, and has grown steadily ever since. 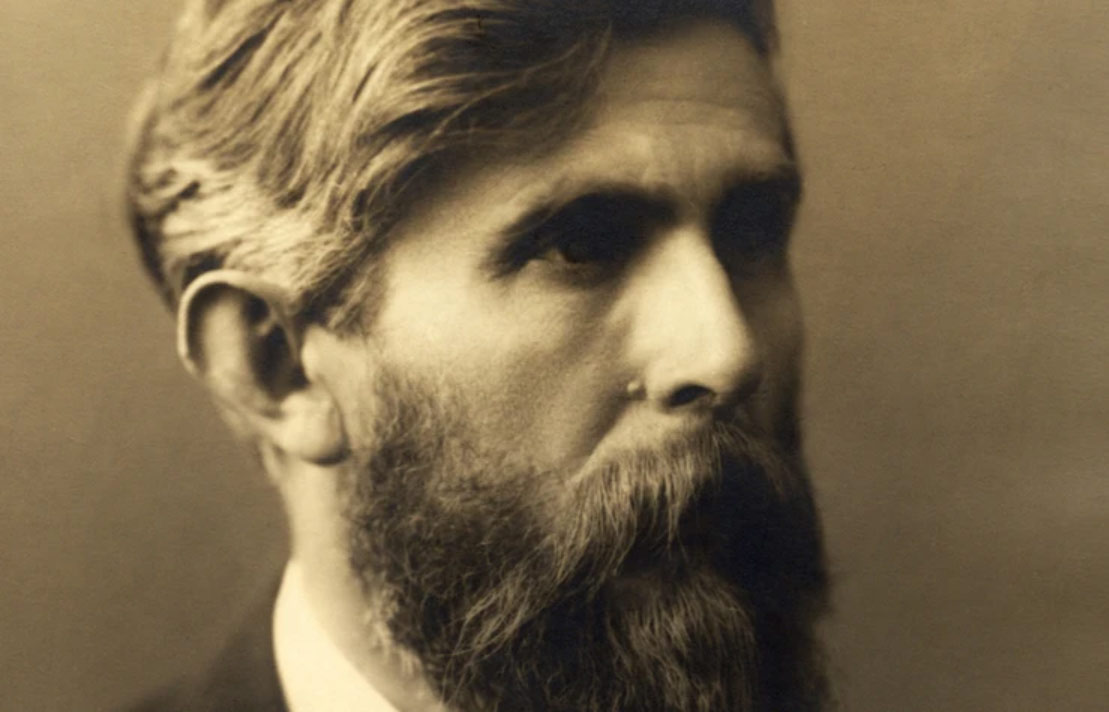 This popular European car brand has one of the most fascinating histories you can possibly imagine. Škoda was in fact, formed out of spite way back in 1896 in the medieval Kingdom of Bohemia, known today as Czechoslovakia, a land-locked country in Eastern Europe, bordering Austria and Germany.

It was 1894, and Václav Klement, a 26 year old bookseller by trade, had a broken bicycle. So, he carefully packed up the machine and sent it back to the German manufacturers Seidel and Naumann, with a letter written in his native Czech requesting that it be repaired.

They returned the bike along with this note, in German;  “If you want us to answer you, we insist that you convey your message in a language we understand.”

During WWII, Czechoslovakia was occupied by the Nazis. The Škoda factory was forced to produce weapons and plane parts for the German war effort. US and British forces bombed the place repeatedly. Following the war, the planned communist economy had a significant impact on the manufacturing process, halting innovation and competitiveness. By the eighties Škoda were still making cars with parts (and style) dating from the sixties.

As time went on, Škoda couldn’t compete on design, performance or reliability with international brands. In 1960 a disastrous attempt was made to enter the US market. It ended badly, and they haven’t touched the US since.

This once proud firm, having invented the motorbike, survived over a hundred years of war and strife, including Nazi occupation and bombing, was reduced to churning out poorly made cars at rock bottom prices for a communist regime.

One reviewer said of the 1976 Škoda Estelle, that it had ‘the handling characteristics of a shopping trolley with a missing wheel’. Škoda cars became synonymous with “all that was wrong with the planned economies of the Soviet satellite states” according to the BBC. 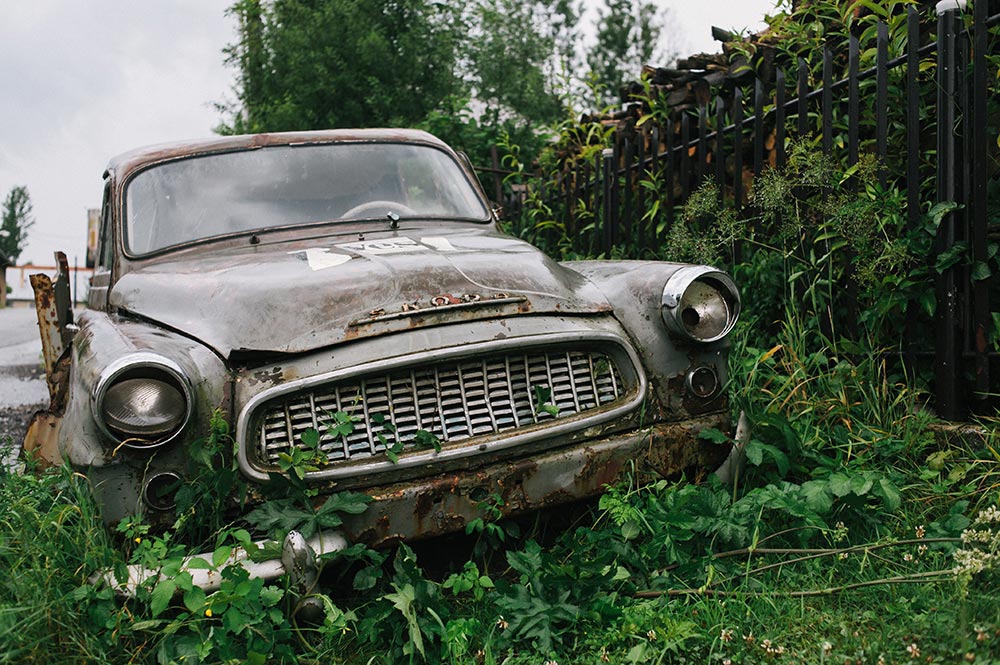 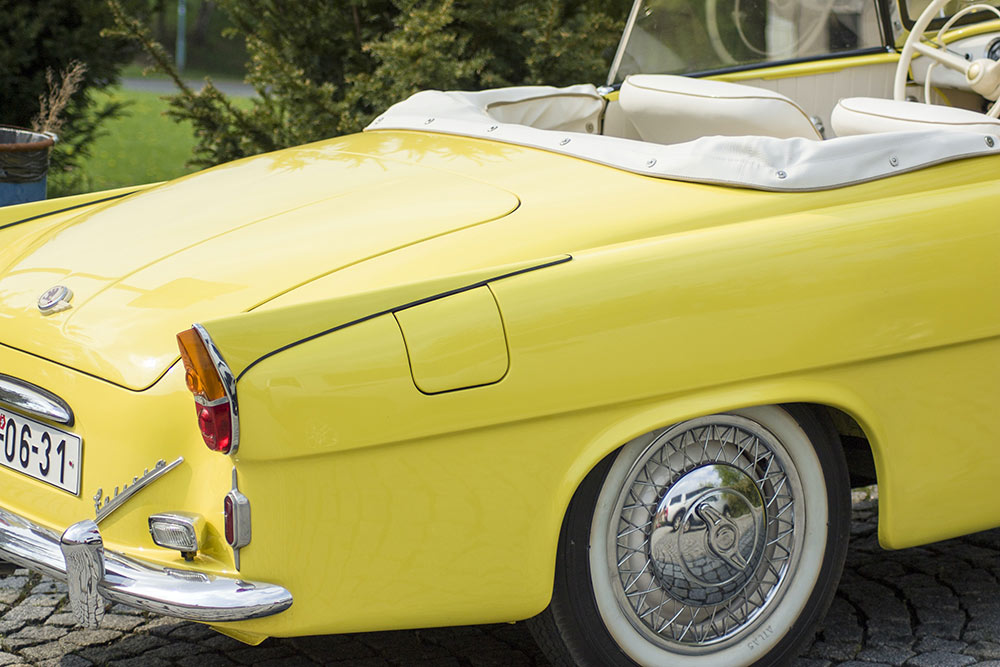 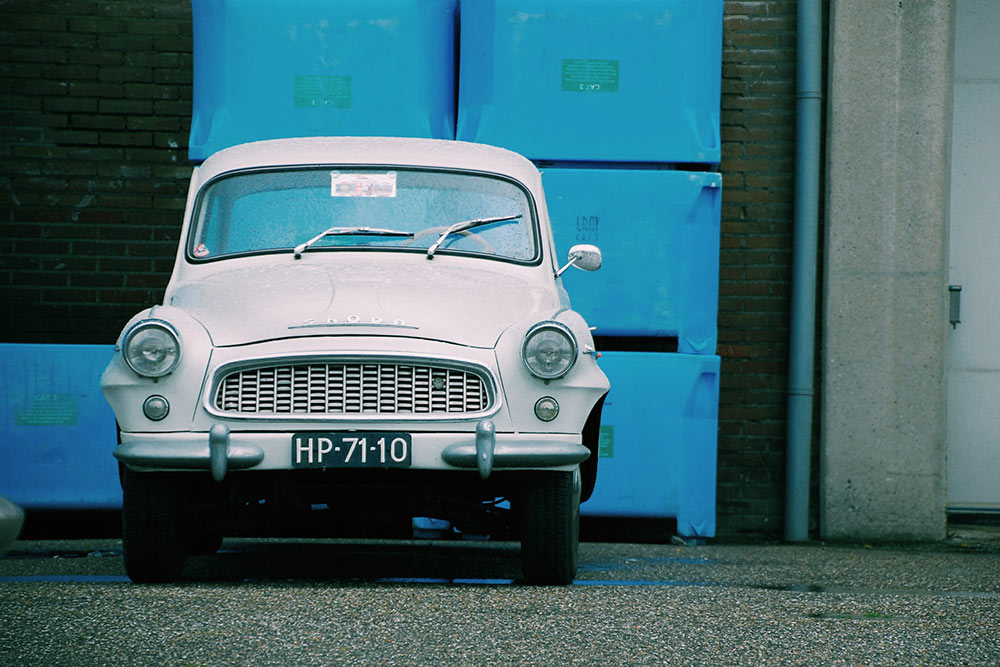 The era of a million Škoda jokes.

These jokes made the brand famous, but for all the wrong reasons.

What goes on pages 4-5 of the Škoda’s user’s manual? The train & bus schedule.

What do you call a Škoda at the top of a Hill? A miracle.

What do you call two Škodas at the top of a hill? A mirage.

What do you call a Škoda with dual exhausts? A wheelbarrow.

What is the Škoda owner’s most ardent wish? To buy a real car.

What do you call a Škoda with a seat belt? A rucksack.

How do you double the value of a Škoda? Fill the tank with petrol.

What did the Ford say to the Škoda? Would you like a tow home?

It wasn’t until 1991 that Škoda’s fortunes would change.

The fall of communism in eastern Europe was brought about by the revolutionary wave of the late 80s, and heralded by the fall of the Berlin wall in 1988. The ‘velvet revolution’ brought about the end of one-party rule in Czechoslovakia and in December 1989 a new, non-communist government was formed. The government made the decision to privatise Škoda, and tendered for a strong international partner. Dozens of international car brands recognised the opportunity to acquire one of the oldest car marques in the world, including BMW, GM and Ford. Eventually only two contenders remained, the German brand Volkswagen and the French-made Renault.

Despite lingering anti-German sentiment, Volkswagen beat Renault to the deal by offering to continue the brand name and invest in R&D. In 1991 VW took a 31% stake in the business and would go on to invest over 13 billion dollars in the firm by 2000.

VW immediately started to invest in design and performance. Within a few short years, Škoda cars started to win industry awards. Trade journalists were impressed, but sales were disappointing, with the stigma of the old brand still very much in play.

And then in 2000, The Mirror newspaper printed this:

Škoda doubled down. They brought in a new PR agency, a new ad agency, doubled their in-house team and started again. This time, they took a far more psychological approach to the campaign.

First for ads, they combined bait and switch with humour and surprise to launch “It’s a Škoda, honest”. Which made no bones about the stigma of buying a car that launched a thousand jokes. The TV ads, which started to run in 1999, were hilariously funny, brilliantly sharp and perfectly executed. 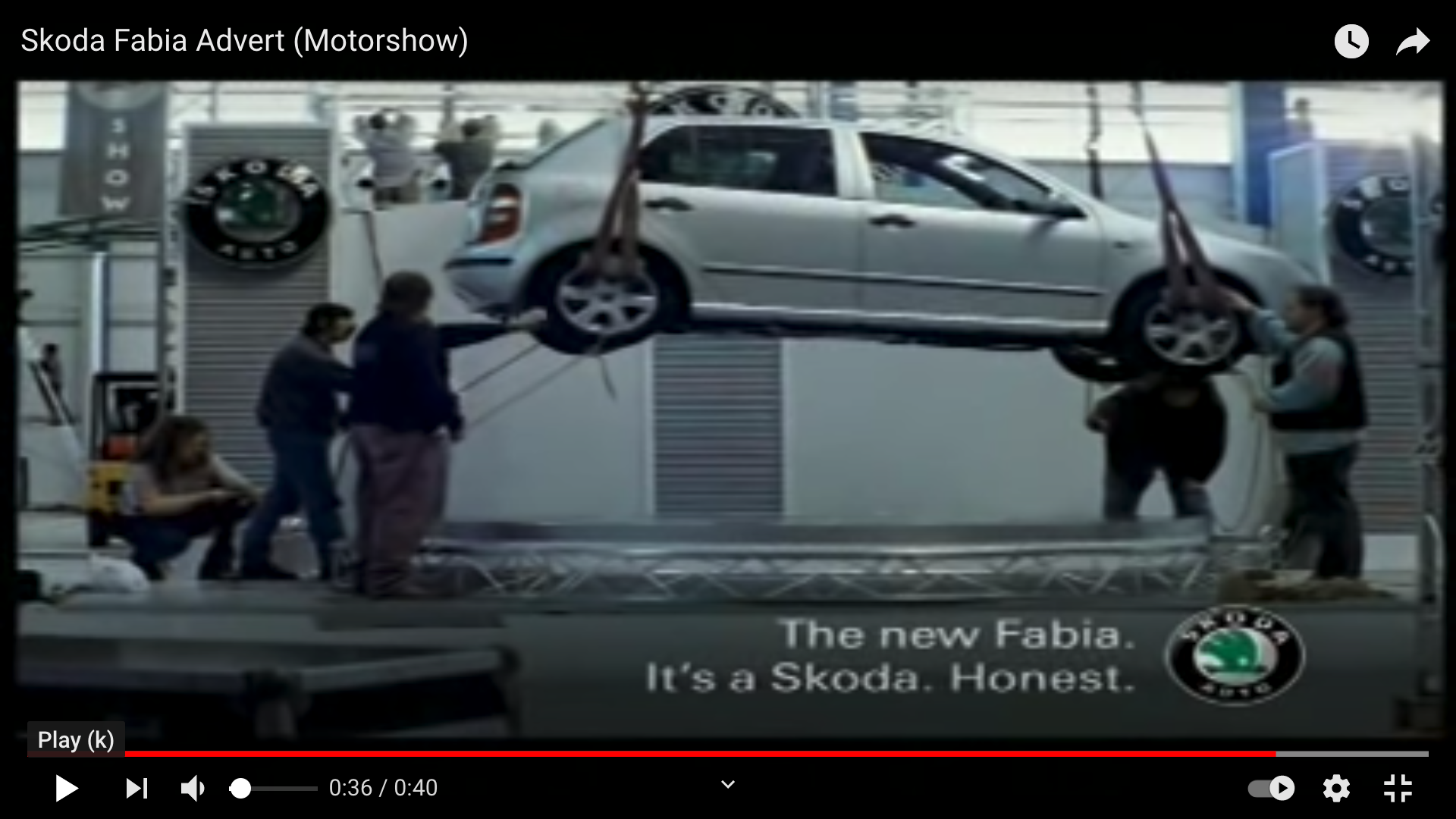 In parallel with the TV campaign, the brand targeted non-conformists and “tipping point opinion formers”, challenging them to drive the car for themselves. One such influencer was Toby Young, a political correspondent for the Spectator. He wrote in GQ, that in fact, only supremely confident people would drive a Škoda, because they literally couldn’t care less what others would think of them. 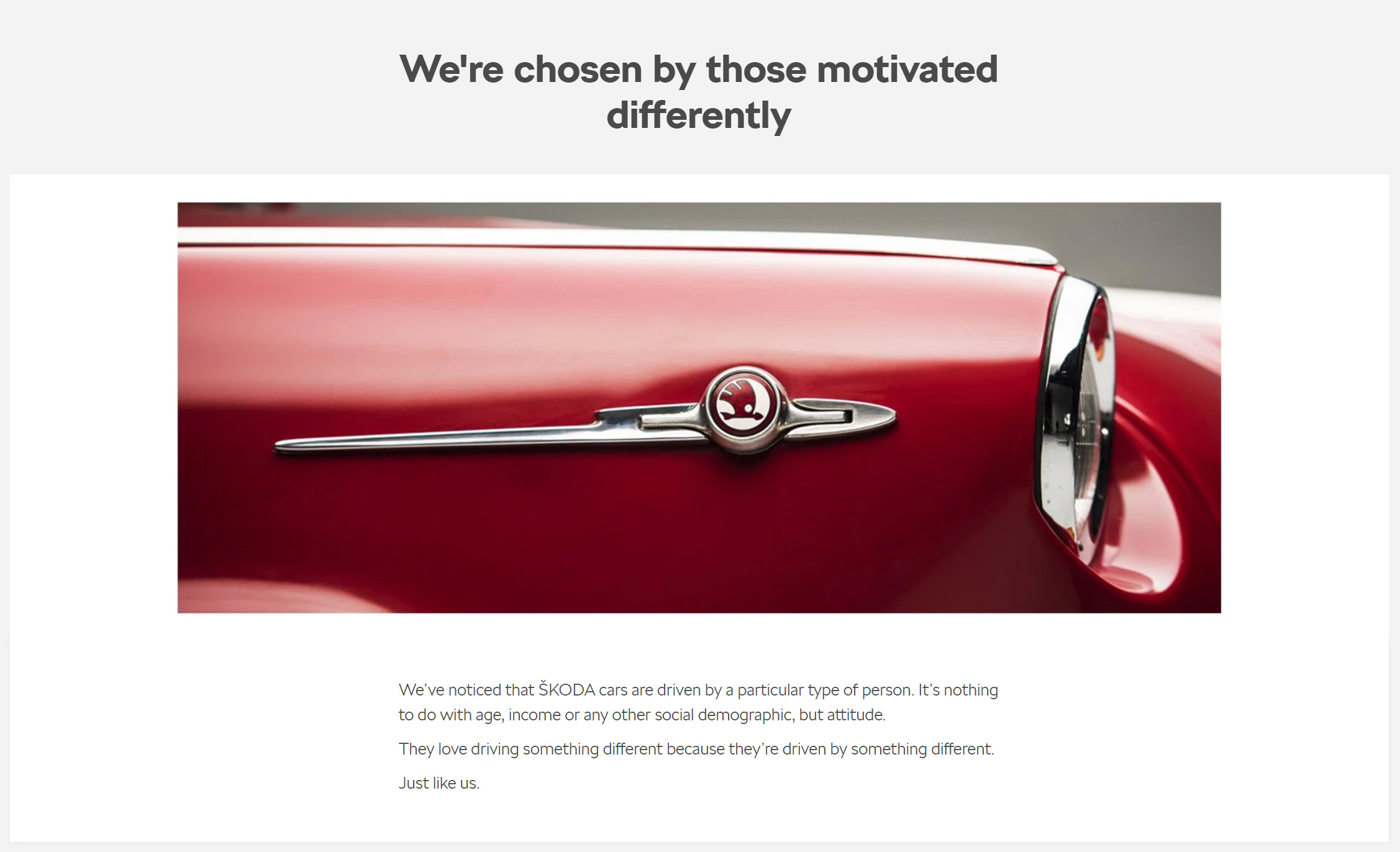 Today, based on numbers of cars on the road, Škoda is the 28th most popular car brand in the UK, after Citroen and before Mitsubishi, according to global data company YouGov.

It has doubled down on its ‘different’ approach and this is apparent in all of their messaging since they unlocked the winning combination of framing and motivated reasoning.

This line from the Škoda website is the distillation of two decades of clever and subversive marketing: “We’re chosen by those motivated differently.”